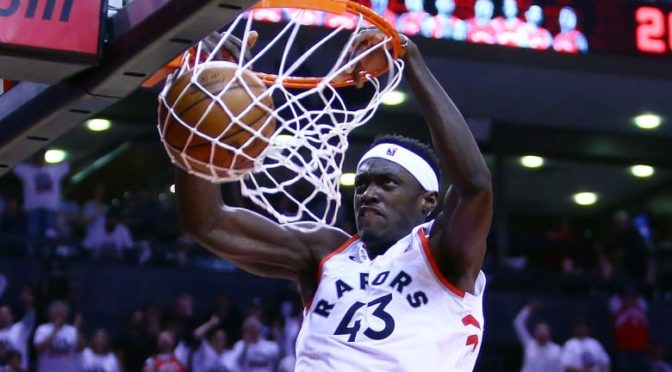 I managed to pick Karl Anthony Towns on the rare night he failed to record a  double double but he is still got over 50 fantasy points. I did fit Wiggins into the lineup with KAT again and the duo each had 26 points. Also, KAT went 3 for 5 from 3, considerably down from his 9 attempts a game. Overall, Towns had a typically good fantasy game.

Middleton had a solid night and picked up his numbers. He started off hot with 7 points in 6 minutes. He would have had more production but the Bucks were blowing out the pistons and Middleton only got 25 minutes. Not a single starter for Milwaukee played more than 28 minutes.

Wednesday night was pretty solid, hoping to carry it over to tonights 4 game slate. Here are 3 players I am building my lineup around.

Siakam has cooled off slightly from his ‘outside chance at MVP’ start, but he is still one of the best two way players in the NBA. He doesn’t average many blocks or steals, but he plays relentless defense thought cause a lot of turn overs and players settling for highly contested shots. Pascal has had a couple of games where he struggled to score over 20 points over the past 10, even then he manages to get his fantasy points with assists and rebounds. Houston is a great matchup for Siakam. PJ Tucker is their best defender but Siakam has more length and is more athletic, I don’t think he will have a problem driving past him or getting off a clean shot with the little jab step mid range move he has. $8,500 is a steal for Pascal tonight.

Barton had a rare off night his last outing against the Lakers. He snapped his 3 game, 40+ fantasy point total with a 21 FPT dud in 37 minutes. There isn’t a better team to play to nip a potential slump in the bud than the Knicks. I think Barton is going to come out firing on Thursday. He has had multiple double digit quarters this season and I think he will be looking to score early and often after only putting up 5 points the previous game. $5,900 has been the going rate for Barton lately and it is a pretty good price, I was hoping it would be a tad bit lower because of the Laker game but $5,900 works just fine.

Millsap is a bargain tonight agains the knicks at only $4,900. He has scored above his average in 8 of the last 10 games, despite that, his salary has been lowered from his last game where he had 37.5 fantasy points. For Millsap’s potential upside, $4,900 is a steal. I am looking at some higher priced players and Millsap at this value will help out a lot.

This is a smaller slate so it is going to be a little harder mixing and matching a lot of different lineup combinations to see what works, it’s hard to make the salaries work. Washington is starting Rui Hachimura at Ceneter tonight against Philadelphia. Joel Embiid is going to bully Rui and whoever they choose to put on him. Wagner is a GTD off the bench, but even fully healthy I don’t think he would be able to stop Embiid. I would strongly consider taking Joel even if Bryant was in the lineup, now that he is out Bryant is basically a must have. I just need the salary to work out. Korkmaz is $3,500 tonight, I need to have at least one salary this low and Korkmaz is going against Washington, who give up the most points in the league. Good luck filling out the rest of your lineup.