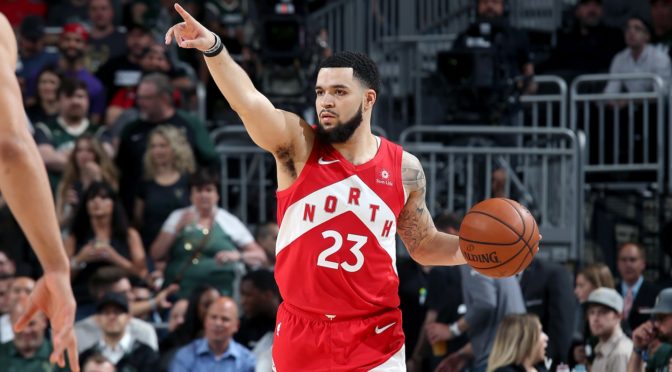 I ended up cashing all the contests I played, unfortunately, my 3 locks I gave out were the only downside to my lineups. Brogdon didn’t play, I switched him out and turned that spot into Ben Simmons, he ended up scoring a career high 34 points. Clint Capela ended up with a double double, but it was only 12 points and 10 rebounds, he did add 2 blocks but that was it for his stat line. I took a chance on Cam Johnson and he didn’t do as well as I thought he would, but he was only $4,100 and he ended up around his fantasy average. I hope your lineup survived my picks, going to turn it around for Sunday

I had a good lineup from an ugly 4 game slate, I hope it continues to today’s 6 games. Here are 3 players to build your lineup around.

Fred VanVleet is a bargain tonight against the Sixers. Last game they played Philadelphia he was $8,000, he finished with 24 points, 8 assists, 3 rebounds and 2 steals. He has been in the in the mid 7000s since then so getting him slightly undervalued at $6,900 is a lock. He is averaging 18.7 points and 7.3 assists a game to go with 2 steals. He leads the league in minutes averaging 37.8 a game, he has been the perfect fantasy player this year. I don’t think I have played Lowry yet this season, Freddie has been the better option. I don’t know if I will have Siakam in this lineup up too but I have had some huge combined point totals when I use that duo.

Danilo has been a safe pick so far this year. He is leading the Thunder in points with 18.6 a game and he is consistently getting 30+ minutes a game. He is mainly a scorer, but over the last few games he has been grabbing 7+ rebounds a game. I like his matchup tonight against Carmelo. Melo has played well since returning with Portland, it looks like he hasn’t skipped a beat on offense, but he is still a bit of a liability on defense. He is a decent defender when he bears down to play, but he is more concerned with the offensive end to consistently play high level defense. He is getting old, he does a good job of conserving energy and picking his spots. He is better at defending in the post, so Gallinari needs to get his outside shot working to get Melo chasing him around the court. $6,700 is a good Price for Danilo tonight.

Hachimura and Wagner are both $5,900 tonight against the Clippers. LAC is obviously a better team than the Wizards, but the matchup at PF a C favour Rui and Mo. Right now, The Clippers have Harkless starting at the 4 and Zubac is starting at Center but he is only averaging 17 minutes a game. $5,900 is a right around where Rui has been priced recently, While Wagner is really overvalued at the price. He has been in the low 4000s most of the season and just recently went to $5000. Now, after a good game against the Heat, DraftKings has jacked his salary up $900. Hachimura is the better play, he has played at least 37 minutes the last 4 games and he has surpassed his fantasy average in the last 5 games.

Those are 3 mid tier salary players I am locking into my lineup, I am looking at a few bargain players to get some more money to spread around. Kent Bazemore is only $3,800 against the Thunder and Josh Okogie is just 4,100 against the Lakers. I am having a hard time filling out this lineup, I don’t really like any of the low salary players, not a lot of matchups jump out to me.