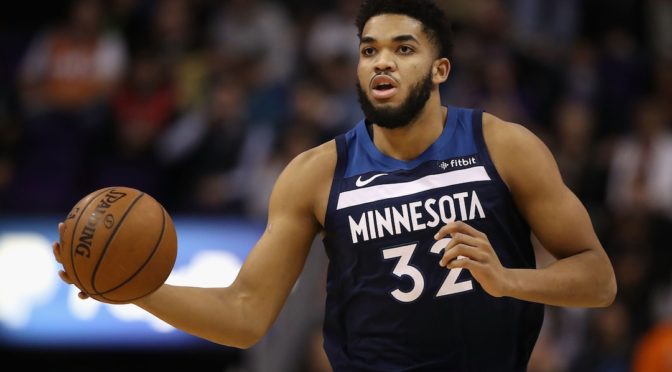 It’s nice to have a full 14 game slate to go over after a 2 game Tuesday night. I liked a lot of players in the San Antonio/ Minnesota, Washington/Phoenix and the Atlanta/Milwaukee game. Here are 3 players I picked to built my lineup around for Wednesday.

KAT has been an absolute monster this season. He is averaging 26.5 points and 12.5 rebounds a game and he has had a double double in 13 of the 15 games he has played so far. What has really been impressive is his 3 point shooting. He is shooting 44.4% on 9.2 attempts a game. San Antonio is is the second worst team in the league defending the 3, opponents are shooting 38.4%. The Spurs big men are going to have a hard time defending KAT. Aldridge isn’t athletic enough to chase him around the perimeter and Poeltl isn’t physical enough to bang with him down low. KAT isn’t the greatest defender but he is chipping in with 1.5 blocks a game. Towns is going to have a huge game against the Spurs.

This has been the best basketball Andrew Wiggins has played since he’s been in the league. His averages are up across the board but his points are way up. His career average is 19.6 and he is averaging 25.2 this season. His consistency had improved too, he has scored 20+ points in 12 of the 14 games he’s played this year, he has four 30+ point games and one 40 point night. Wiggins still isn’t the best defender, but his length and athleticism has him averaging a little over 1 block a game and close to 1 steal a games. I am banking Wiggins and KAT combining for a minimum 100 fantasy points.

Enes Kanter is getting his second straight start with Theis out. This isn’t a great value pick like last game when he was $3,700, but Kanter is still a good pick up at $5,100. I’m looking at Allen in this game too, but I think his salary is way too high. He has been around the $6,200 salary range but he exploded last game going for 22 points and 21 assists. Now, to draft Allen, you’re going to have to drop down $7,600. Kanter is a problem when he is out there, he is averaging 7.6 points and 6 rebounds in 16 minutes a night. Now that he is starting I think a double double is the bare minimum. Kanter may will most likely have less fantasy points than Allen in this game but I think the salary I saved for another position will make up the difference.

There are a few players I am looking to work into my lineup. I like the matchup Brook Lopez has against the Hawks, and he is only $5,900. Redick is really undervalued tonight. JJ had 7 straight games where he scored over his average before last game, he only had 21 fantasy points against the Clippers. He was properly priced at $6,100 because of his previous production, but after the Clippers game they bumped him back down to $5,300.