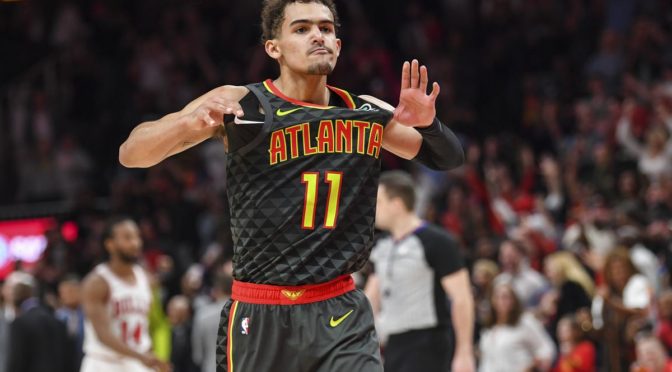 I didn’t have the best Sunday. 2 of the 3 players I had locked in produced a bit but I whiffed on the third. Beal had a bad game by his standards, he had 20 points and 8 assists but he still feel 20+ points shy of his fantasy total from the past 2 weeks. Millsap had 23 and 5 rebounds but he didn’t failed to record an assist, block or steal. One of the main reasons I had him was because of how well he had been on the defensive end over the past few games. Hayes was a complete miss. He got his minutes, 29, but he disappeared when he was out there.

I am looking forward to this big 11 game slate today, here are 3 players to build your DraftKings lineup around on Monday.

Trae Young has been ice cold from 3. He is shooting 29% from 3 over the past 10 games. He went a decent 4/11 against the Raptors last game, but I think this is the game where Trae breaks out of his 3 point slump in a big way. Minnesota is the second worst team defending the perimeter, opponents are shooting 38.1%, and they give up 115 points a game. Young’s 3 point struggles is his only knock fantasy wise. He is averaging 47.6 fantasy points and he finds himself up in the 60s if he is locked in from 3. Trae is going to light up the Timberwolves.

Fournier’s has been the main offensive option for the Magic with Vucevic and Gordon out. Fournier has scored over 20 points in 4 of the last 5 games and he has been above his average fantasy total in 6 of the last 7. $6,400 is a good price for him tonight, I thought he would be closer to $7000 with how he has been playing lately. I think Fournier’s recent hot streak will continue tonight against the Pistons.

Wanamaker is a good value pick for tonight. Kemba Walker is still out so Wanamaker is starting SG while Smart moved over to PG. Wanamaker output has improved with his increase in minutes, he has been close to 30 minutes a night since the Kemba injury. $4,300 is a good price for hum, he was bumped up from $3,500 to the low $4,000s, if he continues his current trend he won’t be a value pick for much longer.

Those are 3 players I am using tonight on DraftKings, there are a couple of others I am looking to fit in to my lineup. Brogdon is coming back from injury and he is really undervalued. He was in the $7,500-$8,300 range before his injury, DraftKings has him listed as $6,000 tonight. Dante DiVincenzo is another good value at $4,900.