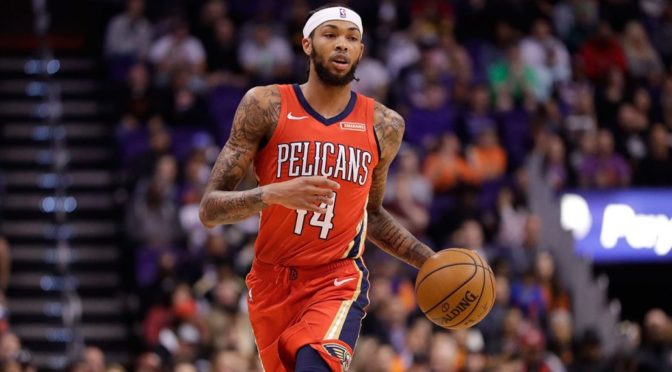 Thank God 2019 is over. The start to this season has been my worst stretch of DFS Basketball I have had since I started playing. I couldn’t get anything going, I would be so comfortable and confident with a lineup and then watch it shit the bed over and over again. I’m going to turn it around in 2020, I have too, there is no possible way I could do any worse.

The 3 players I pick have been pretty good, I will miss on the occasional player, but for the most part they have been at least hitting their average. I hope you all have had better luck filling your lineups around the 3 players I suggest. That being said, here are the three players I am taking to start my DraftKings lineup tonight.

Ingram is the lone bright spot for the Pelicans in an otherwise write off of a season. There have been so many injuries, highlighted by Zion not playing a single game, and there have been trade rumours swirling the team as the deadline approaches. Ingram has put up his best season as a pro, he is averaging 25.3 points, his previous high for a season was 18.3 and his career average is 15.4 points a game. Brandon had surpassed his fantasy average in 5 of the last 6 games and he has scored 20+ in 9 of the last 10. He has been an offensive juggernaut this season, shooting just shy of 50% from the field, 41% from 3 and he is 86% from the line. This is his first game back in LA since being involved in the Anthony Davis trade in the off season, BI is going to be locked in and show LA what the gave up. $7,800 is a good price for Ingram tonight, his salary has been at or around $8,000 lately. I am predicting a 40 point double double tonight for Brandon Ingram.

This will be Ayton’s 5th game of the season. He was suspended 25 games after the first game of the year, he hurt his ankle in his first game back and missed another 5 games. Ayton had a minutes restriction against Portland on Monday, he had 6 points and 12 rebounds in 20 minutes. He played 32 minutes against the Lakers on Wednesday and got a 16 point, 14 rebound double double with 1 steal and 1 block. It is a small sample size but when Ayton is on the court he is a problem. He is more of a traditional big man, he has only attempted one 3 this season. An outside game would be nice, but he is so big and athletic he can bully most other bigs down low, and he has good touch around the rim. When Ayton is healthy, and if he keeps his 14.5 points and 12.3 rebound average where it is, he is going to be in the mid to high $8000. I am scooping him up while he is still slightly undervalued at $7,300. I like this matchup against the Knicks, Taj Gibson is going to have his hands full with Ayton, I think the Suns are going to look to take advantage of that mismatch before the Knicks put in Mitchell Robinson.

Tyler Herro is a good bargain pick today. Duncan Robinson starts for the Heat but Herro averages more minutes, points, assists, rebounds and fantasy points off the bench. Robinson is $4,000 tonight and you can pick up Herro for $3,700. Tyler has reached or exceeded his fantasy average in 7 of the last 10 games and his salary was around $4,300. He is shooting 39% from 3 but that is up to 44% over the last 5 games. Herro has a lot of upside for such a cheap price, plus it frees up more salary for some higher priced players. Nunn, Robinson and Herro have all had great rookie seasons for the Heat, but Herro is by for the best value of the 3, Nunn hasn’t been below $5,000 in a while and Robinson is consistently more expensive than him even though Herro is statistically better.

Those are the 3 players I am building my lineup around, you will be left with an average player salary of $6,240 to use for the other 5 players. There are a couple of players I am looking at fitting into my lineup. Hassan Whiteside against the banged up Wizards is a huge matchup advantage, unfortunately, DraftKings has jacked up his salary accordingly. He was $7,100 2 games ago, it was then raised to $8,300, and now Whiteside is $9,600. That salary is outrageous, Whiteside should put his fantasy average at the very least, but you will be able to get around that mark with a much cheaper player. If you have the salary left over, Whiteside is a sure thing to get a double double and get around 40-45 fantasy points, but I’m not sure if I am willing to chew up that much salary on Whiteside. Kendrick Nunn is a good bargain tonight, he is listed at $4,400 against the Magic.