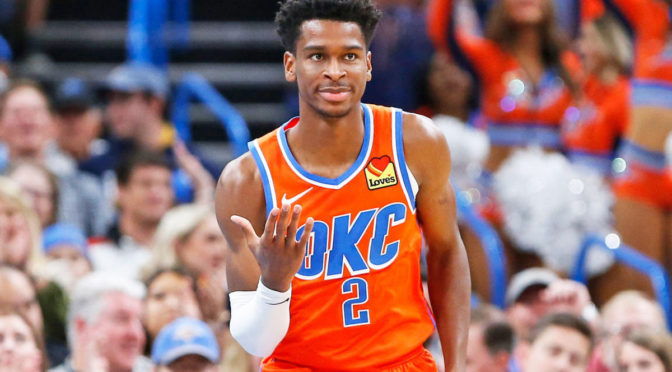 Vucevic had a good game in a surprise loss to the Hawks. He scored 27 points but he failed to reach his average rebound mark, he only had 6 boards. I am happy with Nikola’s production, 41 fantasy points is right on his average.

Ingles reached his fantasy average Monday night, but he had a bad game. I was worried this game was going to be a blowout, and it was, the Jazz won 104-81. Ingles can’t blame the score on his low fantasy total, he played 30 minutes. He had an off night, he only put up 4 threes and made just 1, and he went 4-9 from the field. I was expected a lot more from Ingles with the minutes he played.

I was worried that this game was going to be a blowout, especially with Beal being out of an already thin Wizards lineup. I was right, but it was Washington that won big, surprising Miami 123-105. Like I said, they give up the most points, but they also score the 3rd most points in the league. That was wishful thinking on my end, hoping for a close game for Nunn to get his minutes. Nunn didn’t reach his fantasy average because of lack of minutes, he just had a bad game. He scored 14 points, 3 assists and 2 rebounds in 34 minutes. Disappointing night.

You know what I could use? ANOTHER DAMN 4 GAME SLATE! I am on a legendary cold streak and this garbage schedule is making things worse. Is it too much to ask for a week of 6-9 games? Anyways, you can only play they slate your given, here are 3 players I am building my DraftKings lineup around.

SGA has been playing the best basketball of his young career lately. He has surpassed his fantasy average In 5 of the last 6 games, and he has tied his career high 32 in 3 of those games. I like Gilgeous-Alexander’s athleticism against a hobbled Mavericks backcourt. Luka has been back from injury the last few games but he hasn’t looked 100% healthy and he is questionable for tonight. Tim Hardaway Jr. left Sunday’s game with a hamstring injury and he is a GTD as well. $7,000 is still a good price for SGA considering his recent play, I think Shai is a lock.

Adams had an off game against the Raptors. He wen 2 for 7 from the field and finished with just 9 points. Steven is shooting 62% from the field on the season, the 28% he shot against the Toronto is a rarity. I like the matchup tonight against Dwight Powell. Powell has put together a good season for the Mavs and he is playing a bigger roll on offense as the season goes on. He has broken out on offense this year but he can still improve on the defensive end. Powell will have a hard time against the old school big man Steven Adams. He will be banging Powell down low all game. Dwight is better guarding these new bigs who play as much on the perimeter as they do in the post. Adams doesn’t shoot threes, he doesn’t hang out at the 3 point line, the only time he is out by the perimeter is setting a screen for a pick and roll. He is going to be a handful for Powell tonight. Adams was playing very well before the Toronto game, he had surpassed his fantasy average in the 3 games before it and in 7 of the last 9. $6,600 is a decent salary for Adams tonight.

I like Murray tonight against the Warriors. The Warriors had a throwback game on Christmas day, beating the Rockets and then the Suns a few days later. They fell back to earth with a 20 point loss to the Mavs. The Warriors are back to the walking wounded tonight. Russell and Cauley-Stein are out again so they have Jacob Evans and Chriss in the starting lineup. Murray has been playing well lately. He has beaten his fantasy average in 6 of the last 7 games and his salary has stayed relatively the same. Murray is also active on defense, he is averaging almost 2 steals a a game. Even Murray’s minutes are up from his season average over the last 7 games. $5,900 is a good price for Murray.

Those are the 3 players I am building my DraftKings lineup around. Good luck filling out the rest of your roster.