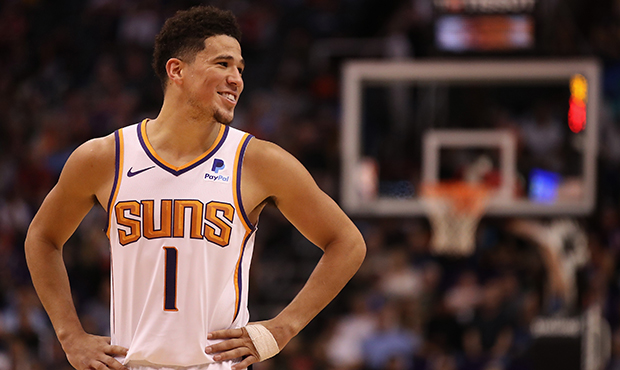 The Early locks faired well on Sunday. LeBron didn’t get a triple double but he did fill the stat sheet. The Lakers looked checked out of most of this game, they couldn’t get anything going. Wiggins failed to break the 20 point plateau but he ended up getting his fantasy numbers and Tyus Jones’ 31 points was a great point total for a $3,100 salary.

The main slate didn’t do as well as the Early. Drummond had one of his sub 10 point game, but still ended up with 16 rebounds and a few blocks and steals, he didn’t hit his fantasy average but it wasn’t a complete waste. Redick and Schroder both had off nights. They both got their minutes, they both shot well from the field, for whatever reason they just didn’t put up their usual points.

There have been too many low or high game slates lately, it is nice to have a 6 game slate to work with tonight. Here are 3 players to build your DraftKings lineup around.

Devin Booker nailed 128 out of 133 threes in practice Sunday, including 45 straight. That is insane, but not surprising. When Booker gets in a groove he is one of the scariest shooters in the NBA. Booker is shooting 41% from 3 this season, however, he has been struggling lately. Something like this could be a much needed boost for Booker. I know, its only practice, but it’s a little thing like this that can get a shooter out of a funk. He clearly found his stroke with those 133 shots, got a little bit of buzz of Twitter, I am hoping it will transfer to the game. The Hornets are 4th worst team in the league defending the 3, opponents shot 38% against them. I think Booker will be given the green light to fire away tonight. Even with Booker’s recent struggles from 3, he has been putting up his fantasy numbers, I think he will have a good night in Charlotte.

Kris Dunn is a good value pick tonight against the Kings. He is starting at point guard and Satoransky has moved over to small forward. Dunn has been coming off the bench a lot this year and gets the occasional start, but he really hasn’t had much production all season. He is, however, tied for third in the league with 2 steals a game. He is only $4,600 tonight and he is going to get 25-30 minutes, he has been able to have some good fantasy nights when he is in the starting lineup.

This is the second game in a row Robin Lopez will be in the starting lineup for his brother Brook. He was only $3,000 and he ended up with 33 fantasy points against the Hornets. He is obviously more expensive today but it is still a good value, he is listed at $4,400. Taj Gibson is getting the start at Center for the Knicks, Lopez matches up better against Gibson than he would Mitchell Robinson. This is a lock for me, Lopez is a bargain.

I am looking at some players in the Golden State game. I have Trae pencilled in right now, but he is really expensive, I may need to  switch him out to free up some salary. Ky Bowman and Glenn Robinson III are both a good value at $5,100. Good luck filling out the rest of your lineup.