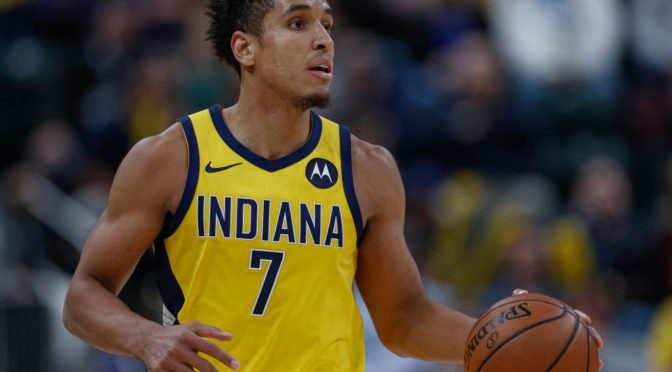 I was off by 4 points on my 100 combined points between Towns and Wiggins prediction. I will be looking to have both of them in as many lineups as I can. Unfortunately, Theis was put into the starting lineup after I had posted the article where I picked Kanter. He played only 14 minutes but still got his fantasy points. If he had started, he would have easily finished with a double double. I ended up using Biyambo.

This has been a rough slate week. 2 game, 14 game, 0 games and now 12. I prefer 4-10 game slates, but if I had to choose one of the two extremes I would prefer the massive slates over the tiny ones. Here are 3 players I am building my lineup around tonight.

Brogdon’s salary is back to where it should be. His first game back against Memphis he was $6,000 and then it jumped to $6,800 against Utah. Now that he has shown he is 100% healthy he is listed back up at $7,900. Brogdon isn’t a great 3 point shooter, he is only shooting 32.8%, but he has a good mid range and he leads the NBA in free throw percentage at 96%. Brogdon doesn’t get to the line often but when he does he is automatic. I am a little worried about a blowout, Atlanta allows 117 points a game and Indiana allows the second lowest opponents PPG in the East, allowing only 103.8.

Harrell, along with Lou, are the two most dangerous bench players in the league. Montrezl is averaging 19 points, 7.6 rebounds and he is getting 30.1 minutes a night. This is a salary that is slightly undervalued, last game he was $7,000 and had 41 fantasy points, he is only $6,400 against the Spurs. Harrell is board line unstoppable against some second units, the pick and roll he runs with Lou Williams are impossible to defend. He dominates the offensive glass too, he is average 3 boards a game and almost off of them lead to 2 points or a trip to the line. Harrell isn’t as big a threat on the defensive end but he does average 1.3 blocks a game.

This is the first time I am using Bertans this year, but I have kicked myself the 2 times I used Mo Wagner over him. Bertans has been filling the stat sheet off the bench for the Wizards lately, he has really been on fire from 3. He is shooting 44% on the season but it is up to 49% over the last 5 games. All of his stats have been up across the board during the same 5 game stretch and his fantasy average is up 6.5 points. Bertans salary had spiked up to $6,000 but it is back down to a reasonable $5,100.

Those are the 3 players I am going to build around. If Aron Baynes is out for the Suns I will be looking at Cheick Diallo who is priced at $4,900.