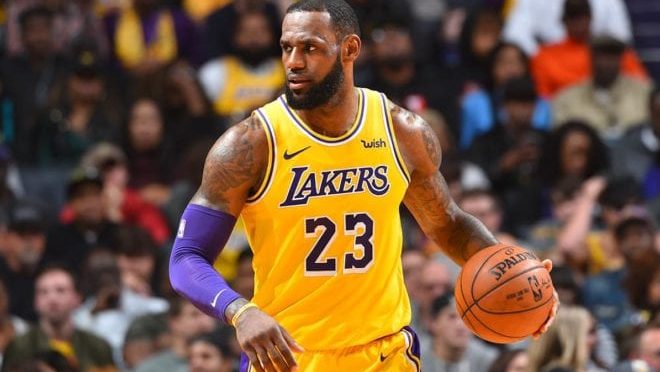 I believe my exact words were ‘Short of Harden going off for one of his 60 point nights, I think Trae will be relatively close to Harden’s point total’. Well guess what happened? That’s right, harden had “one of his 60 point nights” in three quarters! I m happy with what I got from Trae, he followed up his 49 point night with a 37 and 7. Young is a lock for the next Houston game, 31 points and 8.3 assists in 3 games against the Rockets, scoring 36 and 37 in Houston. I final clicked with TJ Warren and he has avoided being my first Fredo of the year. DiVincenzo was a miss, but I ended up taking Harden in my lineup so he more than made up for that low point total.

I will be giving 3 players for 2 four game slates Sunday. The first one locks at 3 pm and and the second one locks at 5.

I don’t need to say much to convince you why you should take LeBron, the main reason is he is listed at $10,600. It has been between $11,200 and $11,600, it may not seem like a big difference but every spare bit of salary I can save will help because I am looking to fit Luka in my lineup too and he is $11,600. LeBron has recorded a double double in 9 of his last 10 games, and he will be looking to get his rebounds to try and out duel Luka in another triple double game for both of them. LeBron always shows up for games like this, it is going to be a fun one to watch.

I know I said I was going to look to stack Wiggins with KAT as much as possible, at the moment I only have Wiggins locked in. KAT is the same price as LeBron and there is no way I could have KAT and Doncic  along with LeBron. KAT is $1,000 less than Doncic but I think Luka will fill more of the stat sheet. I am happy with getting Wiggins at $7,900, slightly undervalued if you look at what he has done over the last 10 games. As long as Wiggins gets his 35 minutes you can pencil him in for around 40 fantasy points, I will continue to take him while his salary is low and his play is consistent.

Unfortunately, Ja Morant is out with back spasms, so Tyus Jones will be getting the start against his old team. This is a really good value pick at $3,100, he is averaging 15.5 fantasy points. Jones will likely see 30 or more minutes so whatever else I can get from him with the extra minutes is a bonus considering his salary. I am looking for the same type of game Robin Lopez had starting last night. He was $3,000 and averaging 9.4 fantasy points a game, he finished with 33 fantasy points and played 24 minutes. This one is a no brainer.

Those are my 3 locks for the Early slate of games. I am still trying out different lineups with KAT, AD or Luka together with LeBron. Duncan Robinson is only $4,400, he is a good value pick, same with Theis against the Knicks, he is only $4,500.

Here are the 3 player I am locking in my Main Slate lineup. This lineup will lock at 5, none of the three I picked are GTD or in anyway in doubt of playing, but crazier things have happened. Keep on eye on the lineups incase there are any changes.

Drummond had been a safe pick for me this season. He is a double double machine, averaging 17.5 points and 17 rebounds, and he he gets a boat load of minutes. There are some nights where he just doesn’t have it on offense and will score 10 points or less, those games are not a write off with Drummomd. He had 7 points earlier this week, but he also had 18 rebounds and a block. Another game he had only 6 points but ended up with 38 fantasy points (14 rebounds, 3 blocks, 2 assists). Aldridge is out for the Spurs, Drummond is going to eat up Poeltl and Gay down low. I am hoping for one of Drummond’s offensive outbursts today, he can easily score 30 if he has his way in the paint and he converts all of his chances down low. There are some games where he will miss every single put back attempt and he has no touch around the rim when he is posting up.

Dennis Schroder has been getting a lot of minutes off the bench. It reminds me of Lou Williams with the Clippers, he will come off the bench for offense when the starters are struggling to produce. Pat Beverley is mainly a defensive weapon, any offense you get from him is a bonus, Lou is expected to provide the offense when he is on the court. Chris Paul is averaging 15.5 points this year but there are times he really struggles to get his points. Last game he had 7 points in 29 minutes against the Pelicans, Schroder had 25 points in 32 minutes. Earlier in the month they both played 30 minutes in LA against the Lakers, Paul had 4 points and Schroder had 30. Schroder is a great deal too, he is going for $5,700, $1,500 cheaper than Chris Paul.

This is going to be the 3rd straight game I am taking Redick when he is available. He is still a great value, only $5,300, and he has continued his upward trend. He has scored above his fantasy average in 9 of the last 10 games and DraftKings has barely moved his salary. This is a perfect game for Redick, one of the best 3 point shooters in the history of the NBA. He is 10th in the league from 3, shooting 46.3%, but he attempts the most of any in the top 10 (7) by at least 2 attempts. The Warriors are the worst 3 point defending team in the league, opponents are shooting 40.3%. I think JJ is going to have a big game against Golden State.

Those are my 3 locks, I am having a little trouble deciding the rest of my lineup. I have Nico Melli pencilled in, he is starting for New Orleans and he is $3,200. Kenrich Williams is a GTD with an ankle, if he plays he will start and he isn’t a bad price either, $4,500. I will take one of those two. I am probably going to take Jonanthan Isaac, he is $7,000 against the Warriors today. He is averaging 13 points and 7.3 rebounds, but he is second in the league with 2.7 blocks and he is getting 1.5 steals a game too.