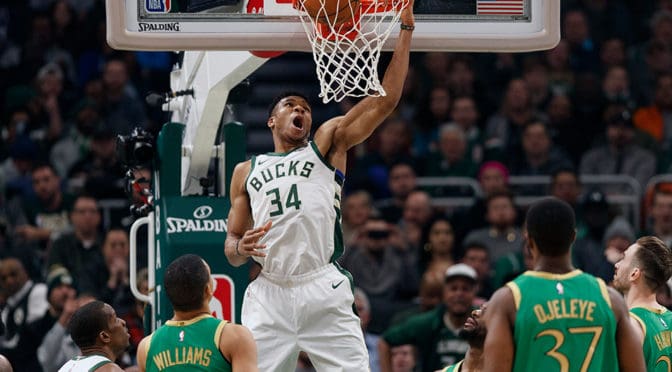 The Milwaukee Bucks is comfortably sitting atop the NBA for pretty much 85% of the season until the suspension. If you have to name one reason for their resurgence, no doubt it would Giannis Antetokonmpo.

Known as the Greek Freak, Antetokounmpo is the reigning MVP and is probably on his way to bag a second straight Maurice Podoloff Trophy. However, while there may be no denying that Giannis is the best player of the NBA’s best team, is he also the Number 1 in fantasy basketball?

Well, for discussion’s sake, I don’t think that he’s the definite fantasy basketball MVP. With the Bucks setting its sights firmly on a championship, they have chosen to rest Antetokounmpo in some games (eight in total) and sometimes resting him for long stretches (he only averages 31 minutes per game).

Nevertheless, his overall production– 29.6 points, 13.7 rebounds, 5.8 dimes, a steal, and a block are ELITE! Giannis is also making a career-high 1.5 threes a game but what depreciates his value in category formats is his free throw shooting. At 10 attempts a game, Antetokounmpo is only making 6.3 a game, for a 63% clip.

I guess you simply have to take the good with the bad when it comes to the league’s reigning MVP. On ESPN’s updated rankings based on a fantasy league’s scoring system, Giannis is tops in H2H points, number three in roto, but drops all the way to 14th in H2H categories.

Still, the point of this article series is to enjoy the performances of the world’s best basketball savants. So let’s sit back and watch the Greek Freak do his thing:

The Jazz’ interior defense is one of the toughest in the league, thanks to the man they call the Stifle Tower. But on this night, you could have two Rudy Goberts and it wouldn’t matter!

Giannis went off for 50 points against the Utah defense (they lost to Utah earlier in the season), scattering 17 shots made in 31 attempts (including three treys). If he has not missed six free throws, he could have done more in the scoring department, but who are we to complain?

From a fantasy perspective: This game highlights Giannis’ statistical season in a nutshell: Heavy point production, elite rebounding and FG%, improved shooting stroke from distance, but he will hurt you in FT%. Still, 50-14-6 plus two steals against 0 turnovers amounts to 81.8 FP, based on the NBA’s official fantasy scoring system. That’s the production of two elite DFS players rolled into one.

The playoff lost last season to the Toronto Raptors must hurt and you can actually see the Bucks’ intensity steaming from their noses. They led basically from wire to wire and north of 30 points, but eventually has to settle for a 10-point win. This game was Antetokounmpo’s way of saying, you’re not beating me this time around.

From a fantasy perspective: Oh, you can see anger in Giannis’ eyes on this one. He took out his playoff frustration to the tune of 36 points, 15 rebounds, eight assists, a steal, and four swats. He almost could not miss from the field (70%) but his FT% were at least above his season average, also at 70%. If you’re playing DFS, Giannis performance could have netted you around 78 points.

In one of the Bucks’ rare losses at home, Giannis came up with his second-best scoring effort for the season. Dallas was leading in double figures most of the game but Milwaukee fought back to make the game interesting. Eventually, they fell short, 120-116 as the Mavs halt the Bucks’ 18-game winning run.

From a fantasy perspective: 73.8 fantasy points isn’t bad by any stretch of the imagination. But 11-for-16 at the stripe is cringe-worthy in category-based leagues.

How do you know if the game gets too easy for you? if you have yourself a triple-double by the third quarter and finish with a career-high in assists. The 2019 MVP did all of that in a single game against the Portland Trail Blazers, reaching a triple-double midway through the third canto. Yes, he was too much!

From a fantasy perspective: 24 points, 19 rebounds, and 15 assists plus extras totaled 76.3 fantasy points for Giannis. He was uncharacteristically inefficient on this one with shooting splits of .333/.143/.500 but it doesn’t matter. He is THAT good!

5.) Triple-Double in the first game of the season

A triple-double at the very first game of the season is quite unique with about 23 of such performances in league history. More than that, though, Giannis has set the tone of what he’s going to do to the opposition with a 30-11-13 stat line against the Houston Rockets.

From a fantasy perspective: Setting the tone, indeed, as we can clearly see Giannis’ statistical strengths, weaknesses, and improvements right off the bat. He shot 6-for-11 at the line but he made two threes in five attempts, a fitting preview of what he is going to be like throughout the season.