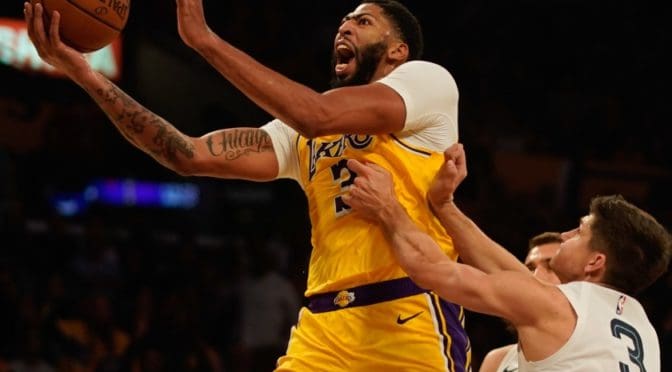 If there’s doubt about Anthony Davis‘ fit next to LeBron James, all of that has been erased. AD has been a force to be reckoned with like he always has been. His 26.7 PPG is second-highest of his career, while supplying 9.4 rebounds, 3.1 assists, 1.5 steals, and 2.4 blocks.

Sure, the rebounding average is his lowest since his rookie year but AD made up for that by making 1.2 threes per game and a career-high 84% clip from the line on over eight attempts.

In the most popular fantasy platforms and categories, Davis has been ranked not lower than number 3. At Yahoo, he is number 1 while he ranks number 2 at ESPN’s roto and H2H category leagues and No. 3 in H2H points. If he has not missed eight games for the season, we probably won’t be having this discussion right now.

Here are AD’s 5 best stat lines of the season:

1.) Wrestling with the Grizz

And it was a one-sided affair, in favor of the Unibrow. Davis was not particularly efficient but he dropped 40 points, thanks to 26 FT made on 27 attempts. He did have eight offensive rebounds in this game (20 total), which put pressure on the Grizzlies offense, in turn, leading to shooting fouls.

And you what the best part is? He actually did it inside THREE quarters!

From a fantasy perspective: OK, that line totaled 73 fantasy points, based on NBA’s official fantasy scoring system. But the not-so-hidden gems here are Davis’ clip from the line, his rebounding, and the fact that he did not commit a single turnover.

After the Grizzlies at No. 1, how about the Wolves at No. 2? Like the bears before them, the large dogs are helpless against such a dynamic force.

AD torched Minnesota with a season-high 50 but stuffed the stat sheet with seven rebounds, six assists, four steals, and a block. As far as finding ways to score, Davis showed up in full battle gear, making 20 FGs on 29 attempts.

From a fantasy perspective: It’s more than the 20-for-29 clip that’s amazing here. Not only does his stat line reached over 80 fantasy points, he was also perfect from the line in 10 attempts! The only other player to have at least 50-7-6-4 this season is James Harden.

AD was mediocre by his standards in the other parts of the game but the block totals is tied for the second-highest this season, behind Hassan Whiteside’s 10-swat game vs Chicago last Nov. 29.

From a fantasy perspective: Aside from the obvious, I really like how he contributed three steals and making 9 of 10 from the line. His DFS total in this game is around 73 points.

4.) Revenge on the Pelicans

There is some truth to players taking it personal against their former teams and this is the proof.

It’s public knowledge that it was AD who wanted out of New Orleans but he still showed them what they are missing.  Davis scored 46 points on a 71% clip from the floor with 13 rebounds, three steals, a dime, and a block.

From a fantasy perspective: AD has got 72.1 fantasy points on this one, the type of production that vaults you at the top of DFS leagues. If you’re playing roto or categories, the efficiency is the real gem. Aside from the aforementioned 71% shooting, he also made all 13 of his free throws while sinking three shots from deep.

5.) Superb performance in a loss

This was right after Kobe Bryant’s tragic death and it looked like the Lakers were in a mournful mood against the Blazers. Well, not AD. He came out to play and had himself a night: 37 points, 16 rebounds, six dimes, five blocks, and a steal.

From a fantasy perspective: Again, that’s another DFS winner for Davis, with his total FP production going in the vicinity of 80. Looking beyond the counting stats, his shooting clip (14-for-22) and the fact that he made three treys is a testament to how complete a basketball player Anthony Davis has become.